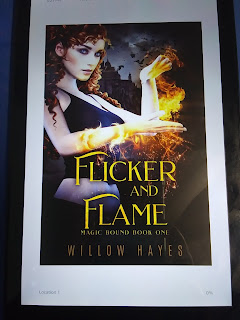 Flicker and Flame by Willow Hayes is a reverse harem paranormal romance novel that introduces readers to a character who has lived her life believing that she is human only to discover that locked inside her is magic that marks her as the true heir to the throne. She’s not ready for the threats that are quickly coming her way, but with the help of her men she just might be able to survive and move forward toward her true path.

Flicker and Flame is the first book that I’ve read by this author and I was really hopeful about it. The blurb really piqued my interest about Kenna and her road to reclaiming what is rightfully hers, but I felt that this book ends up falling a bit flat for me. Kenna has some interesting moments as a character, and I really like her friend Rya, a dryad. I love how we get some really interesting character descriptions and how unique most of them are. We get a couple characters that we’ll love to absolutely hate. These characters bring some life to the story in spots which help to engage me back into the story. I loved reading about Kenna’s work as a social worker and how she helped the children in her care. There are some really heartwarming moments and then there are a couple of absolutely heartbreaking moments as well.

My biggest issue with this story is how quickly things move…mentally (?) with the guys and Kenna. She’s met them once and her “heart twists painfully at the thought of them”? Why? There is an insta-attraction between them, but it wasn’t “insta-love.” I viewed it more as "insta"-lust. Then for almost half the book it’s the guys training and working with Kenna. I felt that it was a bit much. A couple chapters of it, that’d be fine, but for there to be so much focus on it...it's too much and drag's the story down. There are a couple of interesting moments mixed in, but it’s a lot to get through just to have those occasional interesting moments. Kenna is has a "fiery" temper, which, of course, the guys think is "sexy/hot" but it gets irritating in certain situations. In certain moments, I can understand, but then I also look at it from the flip side...she's coming into her powers as they have now been unlocked. She needs to be trained in how to control them. She refuses to see how she could/would be a danger to the people she works with by going to work without any control. Yes, her powers are influenced primarily by her emotions, but seeing as there is now an individual at her job who is intentionally pushing her EMOTIONALLY...it would make sense to LISTEN to the ones who are simply trying to look out for her and protect complete strangers at her job.

Kenna gets mad/irritated with minor stuff but brushes off things that with...other people...would send up red flags. She calls the guys for help when a strange threatening letter shows up at her home, and doesn't even question why the guys are in the neighborhood. I get that it's in the heat of the moment, but when things calm down...she never once questions it. Also, I felt that her being dismissive and flattered by one of the guys saying that she smelled (her scent) was "f**kin' sexy" before but now it's "f**king sexy plus more" now...seriously? No one has put all the pieces together yet of their connection so for her to be sitting around blushing like a horny teenager instead of using her brain...it's just a bit much for me. The author wants to portray her as a "bad-a**" chick, but I can't help but view her more as attitudinal when not necessary and thinking more with her "lady bits" than her brain.

Now, if you’re looking for some steamy moments to drool over…this book is more of a slow-burn in my opinion. There are some kissing, some teasing, and a bit of “playing” but there isn’t really anything truly steamy going on.

I’m rating this book 4 out of 5 stars. The book is okay, but it’s not one that I’d rave about. It has good moments, but they are scattered throughout. I had to push myself to get through certain parts in the hopes that the storyline would pick up and get more interesting, but that only happens closer to the last few chapters. I’m hopeful that the next book will be an improvement, but book one didn’t really meet my expectations.

Posted by Bookworm Bunny at 12:12 PM No comments: