Ninja Girl Adventures by Melissa G. Wilson and Phil Elmore is a fast-paced YA ninja fantasy novel that will capture reader’s attention and pull them into this gripping story and leave them begging for more! This is the first book that I have read by these two authors and I couldn’t put this book down! It’s so good, and I love how they mix in a good message along the way as well.

Ninja Girl Adventures tells about Moira, Marci, and Mindy – three sisters, who have found themselves, orphans. They’ve lost their mother in a tragic car accident some years before and now their father has disappeared while flying over the ocean and is now presumed dead despite no wreckage or body being found. The authors begin this book in the present with a tense situation between Moira and her Uncle Jiro, but then we’re taken back a year in time to where the stage is set for the present-day showdown. I have to say that the authors did a fantastic job with this book. I practically devoured it. We get background and information in the right places, and while the story focuses mostly on Moira, we get a nice cast of characters to really bring it all together.

I like that while Moira is the middle child, and secretly her father’s favorite, she is the most level-headed of the three sisters. I was expecting it to be Mindy who would be the one who took on the responsibilities of things after their father went missing, but that would be the obvious path to take, so I love that these authors chose a different course. For this reason, Moira has fewer problems at school, while her other two sisters’ struggle with various issues. Marci is being bullied and Mindy seems to find trouble due to her high intelligence and quickness to get bored…so….she kinda commits some illegal acts here and there. These girls are written really well. You could easily see them in certain moments having their little spates amongst each other.

While these girls are orphans they aren’t alone and I love that they have someone in their life to help them as much as possible. I don’t like it when their guardian, Uncle Mort feels the need to buy their way out of things in order to simplify the issue though. While the solution itself is costly it comes off as a bit cheap as well. Now, as I stated earlier in my review there is bullying in this book. For readers who struggle with this…you can either choose to pass on this book because it makes you feel uncomfortable, or you can choose to pick this book and maybe…learn a couple things in how the girls come to handle this situation. While I’m older I did find it rather insightful because of how the authors go to reveal the root of it all on both sides of the issue. I honestly loved it.

Now, I’m sure you’re wondering…well, is there anything that you didn’t like about this book? The answer? No. This book is almost too good! LOL! Yeah, like there is any such thing. This book has been carefully looked over and edited so there are little to no noticeable errors throughout. The characters are engaging, there are drama, danger, and even a tiny bit of romance! Watch out though! There is a cliffhanger and I am honestly begging for the next book! I have to know what plays out next!!

I am choosing to rate this book 5 out of 5 stars. This YA book gives readers’ a modern-day ninja story with a touch of fantasy mixed in. I loved every second of it and I can’t wait for the next book to come. If you’re an avid reader of YA books then this a good book to pick up. If you like family-focused stories with a good message mixed in…you honestly can’t go wrong with this book. If you’re just curious about these characters and want to learn more…I promise you, you won’t be disappointed! Grab this book and dive in! 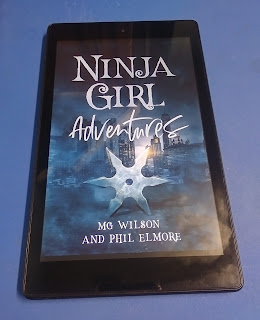 Posted by Bookworm Bunny at 9:54 AM No comments: